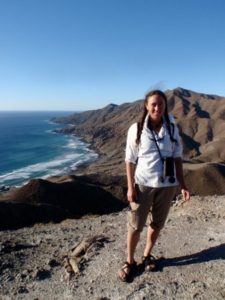 Originally from Southeast Ohio, I received my Associates Degree in Fish and Wildlife Management from Hocking College in 1993 before moving west to pursue my passion for the outdoors and natural resources.  I received a Bachelor Degree in Wildlife Resources at the University of Idaho in 1998, and have been living and working in the Northwest ever since.  My field experience began with conducting stream surveys in Idaho and has led to an adventure filled career in some amazing places including working with the Forest Service on the Tongass National Forest in Alaska in forestry and wildlife, to surveying for spotted owls, great gray owls and red tree voles in the Oregon Cascades to surveying for lynx and wolverines in Montana, working as a research technician studying bears in the Teton mountains in Wyoming, assisting with research on bears, cougars, elk and deer with ODFW in Southwest Oregon to surveying for wolverines, moose, mountain goats, brown bears, eagles, trumpeter swans and more on the Chugach National Forest in Alaska.  I have been working as a Wildlife Biologist with the Siuslaw National Forest since 2008 on the Hebo Ranger District where my work has been focused on managing for a variety of wildlife habitats in coastal Oregon including the restoration of late successional forest and coastal prairie habitat