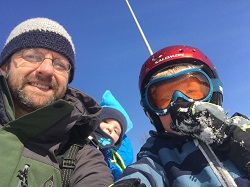 I have been chasing and mapping rare plant and animal species and studying their habitat relationships across seven states in the Pacific Northwest and Hawaii for the last 12 years since earning my B.S. in Environmental Science from the State University of New York at Buffalo in 1997 (1998?). During that time I have worked for 5 different state and federal agencies and as a research assistant for several universities. In 2007 I joined the Washington Department of Fish and Wildlife as a wildlife biologist as part of the research team working on an experimental study assessing the impacts of forest practices on headwater stream systems and their biota.

I have been sneaking into SNVB meetings regularly since my first meeting in Hood River in 2002. I accidentally joined the board as editor of The Murreletter at the 2008 meeting in Missoula where I was merely looking for a free lunch. I assumed the webmaster role a couple years later. My goals as an SNVB board member include increasing membership participation and engagement. Shoot me an email or say hello at the next meeting as I would love to hear your ideas.